Indonesia is a melting pot of natural beauty, ancient culture, religions, culinary delights, world famous beaches and diving spots. The country is the world largest archipelago made up of over 18,000 islands, 6,000 of these are inhabited by the diverse bunch of people that call Indonesia home. 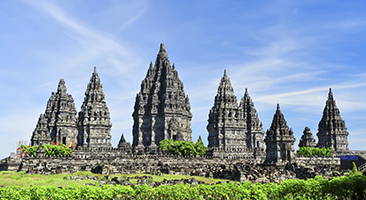 Indonesia sits between the Indian and the Pacific Ocean, a close neighbour of both Malaysia, East Timor and Papua New Guinea. It's the 4th most populated country in the world and is known as the ultimate in diversity. Its 246 million people encompassing over 490 different ethnic cultures and speaking 500 different languages and dialects.

The country is situated on three tectonic plates (Pacific, Eurasian and Australian) which means it has its fair share of volcanos (150 active volcanos) and earthquakes. Travel across Indonesia is pretty amazing unique wildlife, untouched jungles, Buddhist temples (including the largest in the world), and volcano climbing all at your fingertips. 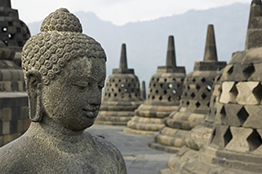 Over 8 million visitors head to Indonesia every year, mostly from Singapore, Malaysia, China and Australia. The country is known around the world for its great diving sites, surf breaks, national parks and volcanos.

There have been threats to this tourism industry such as the 2002 Bali bombings, and outbreaks of bird flu in 2005. However even with these issues the tourist rate has continued to rise and many still enjoy holidays to this great country in the Pacific.

Anyone going into Indonesia needs a valid passport with at least six months of validity left on it from the date of arrival and at least one blank page for the Indonesian visa stamp.

Exploring Indonesia is mostly done by boat, bus, car or bike hire and train in Java and Sumatra. If hiring a car or motorbike always adhere to local laws and only rent a vehicle if you have a valid Canadian licence and international drivers licence for that vehicle.

To rent a car in Indonesia you must be 23 years old and you must have held your licence for at least a year. Many are unaware of the expensive car rental excess that you may be liable for when renting a car on holidays. If you have an accident (or your rental car is damaged or stolen) our travel insurance will cover you for the rental excess (or the cost of repairing the rental vehicle if this is cheaper).

Indonesia has been a target for terrorism, experiences civil unrest and tourists are often a target of thieves and street crime. Always be on alert for thieves operating in tourist locations. Many travellers are targets of serious crimes while partying in Indonesia like drink spiking and violence. Be careful and always use common sense. Don't carry passports or large amounts of cash when partying, don't get ripped off by scams, don't leave your drinks unattended and be aware that using, carrying or buying drugs incurs some serious penalties.

There aren't any compulsory vaccinations you need for Indonesia. Depending on your travel plans there are some recommended vaccines you may choose to have before heading to Indonesia. Including Typhoid, Rabies and Cholera. Whenever you travel you should make sure you are up-to-date on routine vaccines. These include measles-mumps-rubella, tetanus, chickenpox, polio, and your yearly flu shot.

Rather than the usually four seasons most people experience Indonesia has two season, wet and dry. Wet season runs from October to April and dry between May and September. Best time to go is during the dry season so you don't experience long periods of rain or road closures.